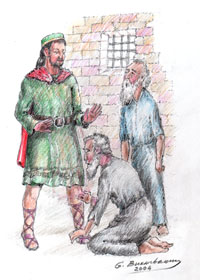 This 2004 drawing by Genrikh Bukhsbaum (1922-2008) depicts Josephus visiting Jewish priests imprisoned by the Roman emperor Nero (Josephus, Life 13-16). Bukhsbaum was born in 1922 in Lvov, Poland (now Ukraine). When the Germans invaded Eastern Poland in 1941, he escaped to Russia. Most of his family died during the Second World War. Bukshbaum lived in Kiev for several decades, before emigrating to the United States with his family in the late 1970s. Most of Bukhsbaum’s drawings depict memories of his childhood and scenes from Jewish life. Apart from the drawing depicting Josephus, there are a few others which concern Jewish history, including a drawing entitled ‘The defenders of Masada’ (2002).